As I glide into my vintage years, I have come to realise that trains and railways are a great way to understand and interpret the apparent confusions of modern life.  You will find some examples of this approach in my blog.  I’m glad to be old enough to have main line steam as part of my boyhood and adolescence and its great that steam trains are still flourishing in so many ways.  But modern railways can teach us plenty too. 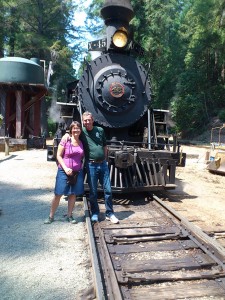 Alan and his wife Linda at the Skunk Railroad in California.

Why steam trains matter, and Dampfloks are AOK 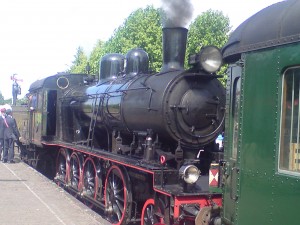 I know there are legions of other maturing men, as well as me ,who are still in love with steam trains.  Just go to any preservation railway and you’ll see them, both working and travelling.  And about 80% of all the people you see on these lines are men, mostly over 50.  These railways, like The Watercress Line in Hampshire where I’m a Life Member, are magic bubbles, coherent worlds of innocence and delight where one feels remote from the miseries of yobs and evil dictators.

I’m very lucky to have a girlfriend who quite enjoys steam trains too, so they get woven into outings and holidays.  I am writing this in the small town of Wernigerode in eastern Germany, with more excitement than a hot first date.  That could be heaven or hell, whereas I know my date with the Dampfloks of the Harzer Schmalspurbahnen will be heaven.

Steam buffs reading this will already realise that mountain railways are great, because the engines will be stretched to perform.  Now I’m here, I realise it’s even better.  The HSB route from here, at 230 metres above sea level, actually climbs to the top of the highest mountain in northern Germany, 1125 metres, and in a fairly short distance. 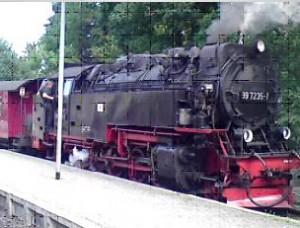 The hot date with the trains surpassed my hopes: partly because the carriages have open verandahs at each end, so you can get the sound, smell and smuts as the engine roars up the gradients.  And the line winds among beautiful forest, with occasional big views.  The scenery is not as magical and dramatic as the Settle and Carlisle, or the Faenza in Italy, but it’s good. 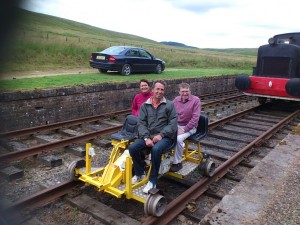 This is a private railway, quarter mile long, owned by a guy who bought part of the old track bed near Riccarton Junction in the Borders.