Even better with women! 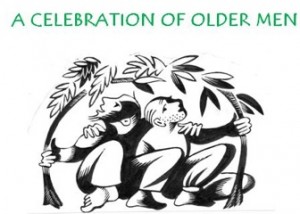 Illustration by Hugh Dunford Wood used in the event brochure

Older men are hardly a trendy topic, and to celebrate them is unheard of.  So this event which I organised at Bridport Arts Centre could be unique.  And despite my tendency to be critical of most things, including myself, I can only describe the evening as a total success.

My motive in creating the event was to promote my new book, Out of the Woods: A guide to life for men beyond 50: I decided that the best way to do so was through a performance event bringing several talents together.  The leaflet promised Stories, songs, insights, even facts, about the marvels and mysteries of men beyond 50.

Fortunately, I already knew other men of this age with relevant talents, and was delighted that they readily agreed to take part.  Geoff Mead is a professional storyteller from Lyme Regis, who specialises in those rare fairytales where the central figures are older.  He was a superb compère for the whole evening, and told a couple of brilliant and relevant tales.

Clive Whaley is already known around Bridport for creating a superb documentary-musical, Lonely Boys, which explores the marvels and mysteries of men at different life stages.  For this Celebration, he performed a few songs from Lonely Boys, and a couple written specially for this evening.  He was supported by Steve Jones, a brilliant local professional musician, who also added atmosphere to the whole evening by playing keyboard boogie before the show and during the interval.

Although I have done a lot of public speaking and run many workshops, I was pretty nervous about my own role in the event.  I was confident about my colleagues, who are all seasoned performers.  The prospect of making the story of older men and my book entertaining was truly daunting.  The rest of the team simply urged me to be myself, and it worked.  My selected readings from the book went well, and taking questions from the audience created a sense of conversation about the issues.

We promoted the evening as suitable for men and women of all ages, and the local press were really supportive in putting the word out.  We had a capacity crowd, and a few people turned away at the door: I was delighted that over one third of the audience were women.  As I have realised the depth of many men’s denial about ageing and the need to change, I have realised that women can play a vital role in getting my book into the hands of men who need it.

Every individual element of the evening worked well, and the combination was outstanding.  Probably the highlight for me was singing alongside Clive on a modified version of the Stealers Wheel classic which we had adapted: Stuck in the Midlife with You…  Life beyond 50 should include plenty of new adventures, and this was a good one.