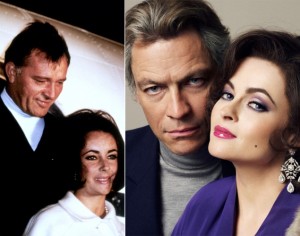 The recent BBC4 biopic on Richard Burton and Liz Taylor was magnetic and illuminating.  It showed why these two had such fascination for each other, and us: and it also showed many of the don’ts for men and women in relationships beyond 50.

The film’s focus is the year when Richard and Liz got together to perform Private Lives, a play by Noel Coward about a middle-aged couple who can’t live with each other – or without.  Burton is 57, Taylor has just turned 50: they’re by now twice married and twice divorced from each other, both with new partners, but both fascinated with each other.

The acting by Helena Bonham Carter and Dominic West is superb: we get the charisma, and the angst about ageing, and a stunning array of dysfunctional relationship skills.

Burton’s appeal grows not only from his looks, but also his wonderful voice (Oxford Welsh with notes of Hollywood), his gift for quoting Shakespeare, and a tinge of underlying vulnerability.  During rehearsals for the play, he repeatedly snubs Liz to spend time with his new girlfriend.

On the one evening he asks Liz to dinner, when she tries to discuss their relationship, he abruptly starts appraising her acting.  Like many men, he’s too vulnerable to handle the intensity on offer – and with a woman as stormy as Liz, who can blame him?

In Liz Taylor at 50, we see a star who’s still charismatic, who gets a standing ovation when she walks on stage, but is overweight, needy, scared of ageing, and afloat on a befuddling mix of drink, drugs and pills.

Liz’s relationship armoury makes heavy use of threats, abrupt withdrawals, and nagging.  She’s used to getting whatever she wants, and part of Burton’s appeal to her is he has enough strength to resist her – sometimes.

There’s brief, honest, touching conversation between them about what makes a good relationship.  Burton includes  ‘the ability to be openly abject with each other’, which is perceptive, but rarely happens between them.

It’s poignant to see a couple with such talent and charisma, and such love for each other, unable to get it together: but hopefully we everyday mortals can learn from them how not to do midlife relationships.  If you want to learn how to do them well, buy Out of the Woods: A guide to life for men beyond 50.