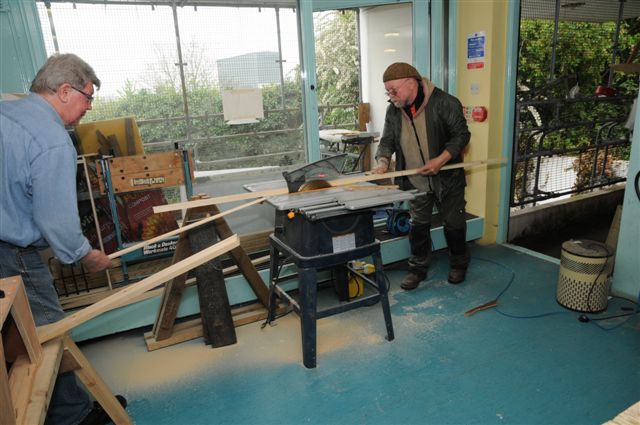 Les and Terry in action at Camden Town Shed

Men’s Sheds are simply a largeish space where men can use or learn skills like woodworking, and enjoy informal social contact.  It’s often said that men relate to each other better shoulder-to-shoulder than face-to-face, which is why this simple idea works so well.

An unusual feature of Men’s Sheds is that they began as a deliberate initiative to reduce depression among older men.  The idea grew from the first national conference on men’s health in Australia, in 1995.  There are now over 900 sheds in Oz: the idea is well understood and supported by local communities there , and there is some funding from government and charities.

It was the atmosphere that felt special, and hard to describe.  I visited on a working day, sharing the space with 6 – 8 men quietly and relaxedly working on a range of projects.  Men were moving gently around the room, giving technical advice, admiring each other’s work, or just chatting.  There are no pressures or demands, and it felt a safe, welcoming, nurturing space, especially for older men who feel they lack confidence and social skills.There are reportedly about 30 Men’s Sheds in the UK, and 30 more in gestation.  I recently visited CamdenTown Men’s Shed, which opened in May 2011: see www.camdentownshed.org.  Physically it’s very simple: a rented room, about 700 square feet in a local community centre, with a range of woodworking machinery and hand tools, much of it donated.

UK Sheds generally aim to combat social isolation but vary widely in levels of funding and how they start.  Camden was started by its users, and has days for men only, and days for men and women.  Much of its start-up funding came from private donors, some from charities, but they aim to be self-sufficient through trading goods and services.  Nationally there is a UK website www.menssheds.org.uk.  This gives a flavour of the diversity of sheds: several initiated by Age UK Cheshire, some arising from local charities or other sources.  Some sheds have a focus on repair and re-use services for their locality, some on hobbies and social activities; a few share their skills with young adults.

The potential of this simple idea is huge, with benefits not only for older men, but for whole communities.  Moves are afoot to share expertise and services (such as insurance) to make starting a shed easier.  The Men Beyond 50 Network hopes to help the UK Men’s Sheds Network as a partner organisation.  I urge you to visit the website and explore how you might get involved. 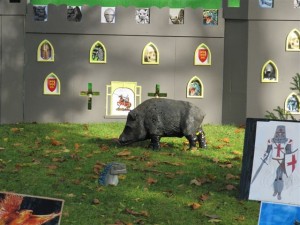 A castle made by Camden Shed members for a local event