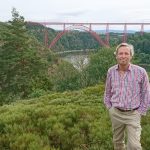 There’s a subtle buzz when a train sets off on what I’d call a hyper-scenic route. It may well be a mere two-coach diesel, from a mundane city like Leeds or Clermont-Ferrand. But some of the passengers are different. They’ve got cameras, journals, route maps. Some are outdoors types with hiking gear or touring bikes. They’re alert and they’re in the know: it’s a secret society of rail connoisseurs.

My favorite, archetypal hyper-scenic route for many years has been the Settle and Carlisle. I’ve done it so many times that it’s like hearing a favourite symphony: you know when a great bit is coming up, and it’s always wonderful. However, this blog is about two hyper-scenic routes in France which I’ve just travelled for the first time.

There’s a lot to like about French railways, plus a few things that are downright annoying. First off to like, there’s the fact that France is abundant in spectacular landscapes of many kinds. Second, the French with their taste for quirky innovation put railways through lots of them. And third, many of these lines are still running. I think helped by generous public subsidies, perhaps some French influence with the EU…

And French railways still have industrial sidings in use, with small privately-owned shunting engines, and intriguing obscure branch lines and spurs that curve off out of sight. One big downside of SNCF is their appalling online info and booking system, which always tries to force you onto TGV’s, and makes it hard to plan or book a trip on the side lines. I’ve booked my own rail trips to Marrakech and California, but for France I gave up and booked via a specialist agent: Ffestiniog Travel, who did a fine job.

It’s also sad that SNCF are hostile to steam. The Railway Touring Company, who run chartered steam trains all over the world, gave up on France many years ago. There are quite a few heritage steam lines in France, but many are just a couple of tank engines on a few miles of track. But they have a wonderful offer on some lines: check out Velorail.

It’s all about a viaduct

Why am I on this Friday tour of France by rail? To see the Garabit Viaduct. Even among railway cognoscenti, the Garabit is not widely known: I was chuffed to find that my steam travel pal Nick, who knows more about heritage railway carriages than I’d ever want to, had never heard of it. And those who’ve visited are an even more exclusive minority – because it’s really hard to do.

The Garabit is on an obscure line which wiggles down from Clermont-Ferrand, near the middle of France, to the Mediterranean coast at Béziers. There’s only one train each day each way! And I’d been warned that you don’t even see the viaduct when you go over on a train, because it’s dead straight. Ironically, one of the best views is from the rest area on the nearby A75 motorway, which crosses the better-known Millau viaduct some miles south of here. At least it works in reverse – you get a great view of the Millau viaduct from the train!

At first I thought, I’ll have to hire a car to see a railway viaduct, but I got a better idea when I invested in a detailed local guidebook (Guide Routard for the Auvergne, in French). My brainwave was to stay for two nights at the picturesque old town of Saint Flour, and then rent a bicycle to get to Garabit, 13km to the south. This trip has taken a lot of planning!

By now, you may validly be wondering, what makes the Garabit Viaduct such a cult item? It was a pioneer in the era of metal viaducts, which enabled far greater heights and spans than brick or stone. And this one is a thing of beauty, designed by Gustave Eiffel. Although he’s best known for that tower, he was an inspired bridge engineer. The Garabit has a main span of 541 feet, and a height of 407 feet – dizzying when you’re that far up. Definitely worth the trip! 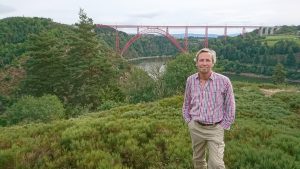 This is the name of the line from Clermont to Béziers, which is 387km long, about half the length of France: the Garabit Viaduct is its landmark feature. It is like a longer version of the Settle & Carlisle: both are built through incredibly rugged terrain, and neither serves any sizeable towns. They’re heroic gestures, motivated by some long-forgotten goal of railway strategy, and surviving against economic odds.

The one train per day is a poignant decrepit, two-coach unit, covered in graffiti, and it takes six and a half hours. The scenery and engineering are so good that at times I felt stuffed as you might at an exuberant banquet. The line winds through many gorges, with rapid alternation of tunnels and viaducts, large and small.

Some rocky hills above us have ancient castles or fortified villages on top. At one point, we cross a high pass: there’s a perfect medieval chateau, complete with round turrets and conical roofs, and a buzzard gliding between us. Even the station names are tremendously evocative, and should be spoken slowly and savoured: Saint-Georges-de-Luzençon, Banassac la Canourgue, Ceilhes Roqueredonde, Sévérac-le-Château, Tournemire Roquefort. 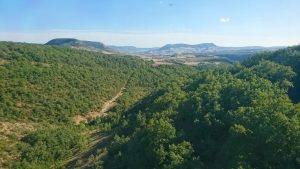 At times there are huge vistas of great rolling hills, wide valleys and forests. And very subtly, the terrain and the buildings are changing, until I feel we’re in a landscape by Cézanne. The houses have Roman clay roof tiles and pale painted walls, there are swathes of vineyards, and the Mediterranean is close by.

The S&C is nourished by a benign alliance between Network Rail, volunteers, and intelligent local authorities. The tourism benefits are understood and cultivated. Some of the stations, like Settle and Appleby, have been superbly restored, others are rented as holiday cottages. Volunteers even provide a trolley service of refreshments and guidebooks on the trains. Absolutely none of that applies on the Ligne de Causses. I asked the guard if the train stopped anywhere that I could get a coffee. He shook his head, surprised at the question. It was less primitive in 1884! 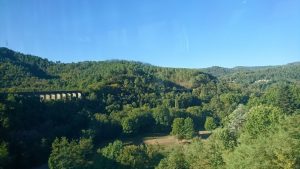