By train through the Brenner Pass, and lots more!

I suspect that most British train lovers, like me, mostly travel across Europe to and from London – radiating out from the Eurostar. Belatedly I’m realising that I’ve missed out on some great rail journeys that run across these radial routes from England. 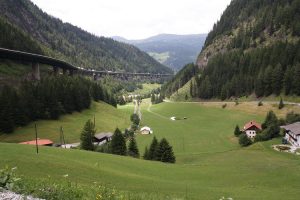 The Brenner Pass and Italian Tyrol are good example: I’ve wanted to see them for years, but they’re not on the way to anywhere from England. So I was excited recently when I realised I could go on from a steam train holiday in Poland to a pilgrimage in Italy. This blog covers the journey between the two: you can find other blogs about London to Krakow, and Steam Adventures in Poland and Slovakia, here…

By day, the journey between Krakow and Vienna is slow, and the landscapes pleasant but not exceptional. I saved time by using the Polish Railways sleeper, which was comfortable. From Vienna you can catch the impressive Railjet, OBB’s high-speed service. Instead of building a completely separate line, OBB have built a series of new high-speed stretches which connect back to the existing line for main stations. The only drawback is that much of the new lines is in tunnels or behind sound barriers, so you see less of the scenery.

To get into Italy via the Brenner Pass, you usually need to change trains in Innsbruck, and I recommend a couple of hours stopover here to saunter around the old town and take on refreshments. The town’s most famous landmark, the Goldenes Dachl (Golden Roof) is less than 15 minutes’ walk from the station. From here, my train was a big EC intercity from Munich to Venice – another route you’d rarely take from England.

If you’re wondering why you’ve heard of the Brenner Pass, the answer is probably historical. This is the lowest North – South pass through the Alps at 1370 metres, and it’s been important at least since Roman times. More recently, it was vital in Austria-Hungary’s efforts to maintain its territory south of the Alps, and they built the first trans-Alpine railway through Brenner between 1860 and 1867.

Many rail fans are probably connoisseurs of mountain routes, and I’d rate the Brenner route highly. As soon as the train leaves Innsbruck, it’s climbing steeply up a narrow gorge, through a series of tunnels, with an Alpine torrent far below. What adds to the drama is the autobahn: first seen spanning the gorge on an amazingly high viaduct, several hundred feet above the railway.

The autobahn reappears, now running high up on the other side of the gorge on a series of viaducts. The train keeps climbing steeply till it’s level with the road, which then goes way higher again. This time, the railway forms a big horseshoe up a side valley to gain altitude.

The drama of the pass is helped by glimpses of snow-capped peaks far above, and because the summit is not a tunnel, it’s the bleak frontier station of Brenner, where several freight trains of lorry trailers await the line. 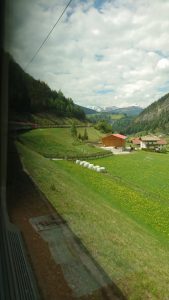 View from the train on The Brenner Pass

For Brenner/Brennero South, all the signage is in Italian and German: this is the Italian Tyrol, formerly the Sudtirol, probably Austria’s most painful territory loss (along with Trieste, her outlet to the sea).

The Tyrol region straddles the Alps, and for centuries has drawn cultural influences from the North and South. Like other regions of Europe (e.g. Galicia, now in southern Poland), Tyrol has lurched between eras of autonomy and frequent foreign domination. The Tyroleans fought hard for their independence, notably against Napoleon, whose armies they defeated twice through a mix of bravery, bluff, and man-made avalanches.

The main town in Sudtirol is Bozen/Bolzano, so delightful and interesting it gets its own blog. For many miles south from Bolzano, the train follows the River Isarco, which combines a wide flat valley full of vineyards with magnificent, high, semi-wooded cliffs on each side.

Beyond Trento, the train is on the plains around the River Po, and the landscape is nondescript as far as Bologna.

From here, the trains offer main interest. The high-speed Frecciarossa (Red Arrow) of Trenitalia is the rail equivalent of Alfa Romeo, in style, speed, and that luscious Italian racing red. Its private sector competitor, Italo, has chosen tasteful crimson lake, á la Midland Railway: it’s less expensive but less punctual.
Between Florence and Rome, you’ll get glimpses of fine countryside and distant wooded mountains, but less than you might hope, as much of the new high-speed track is in tunnels. However, Rome awaits, with its ruins, craft beers and gelato!

Practical tips
• It seems impossible to book tickets online with OBB (Austrian Railways) from outside Austria, I booked by phone with Deutsche Bahn in London, who are a good option for most European journeys.
• Through the Brenner Pass, the best views are mostly on the right side of the train.
• For trains in Italy, I find www.trenitalia.com quite easy to use. On Frecciarossa, you can get good deals if you book well ahead, and it’s often little extra to upgrade above Standard Class.