The re-creation of the British Pullman is a classic British story of eccentric, visionary wealth allied to traditional craftsmanship. James Sherwood rescued carriages from weird locations and states of disarray. Bob Dunn, whose grandfather made marquetry for the original cars, was one of a host of dedicated restorers. 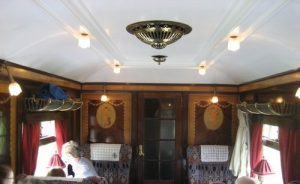 Now, for a princely sum, you can get a princely ride on the British Pullman: most often, a day outing from London. On June 7, I treated my mother and me to a trip on this palatial train, on a re-run of one of the Classic Pullman trips: the Bournemouth Belle.

The interior of the Phoenix carriage

When I was born, my family lived in a rented flat in Wyndham Road, near Bournemouth Station. My mother has often told me how she’d lift me up at the kitchen window to see the Bournemouth Belle go by. Later, when I moved to Reading, we’d regularly find ourselves peering longingly into those fairytale Pullman cars from our second-class compartment at Southampton Central Station, on our way to see family in Bournemouth. 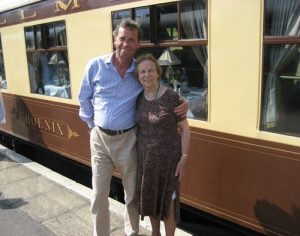 So when I was looking for a really special gift for a big birthday, the Bournemouth Belle was ideal. And everything about the trip was truly perfection on rails: the Pullman cars are works of art, down to the mosaics in the toilets; the food and drink were sumptuous; and the service was both friendly and impeccable.

Alan and his mother in front of the Phoenix carriage

Our itinerary included three hours of free time in Bournemouth, so we had a delightful nostalgia binge, revisiting Wyndham Road and other favourite spots from my childhood, and my mother’s.
The Pullman carriages are so special that you receive a colour booklet with a whole page on each one’s history. Ours was Phoenix, who started life in 1927 as Rainbow, and was destroyed by fire in 1936. She was rebuilt in 1952 and used on the Golden Arrow, carrying such celebrities as Sophia Loren and General de Gaulle.

This might be the trip of a lifetime for you, as it was for me: it’s totally worth taking!

One of many highlights on my recent holiday in Alsace was a wine tasting at Emile Beyer, one of the region’s long established wine producers. It was guided by Christian Beyer, the fourteenth generation of the clan, and it was the most eloquent exposition of the wine-maker’s craft I’ve ever heard. 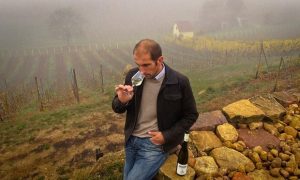 He commented that the French word, viniculture, is more accurate and expressive of the craft than wine-maker: “at least eighty per cent of the skill is in the growing the grapes”.
For him the biggest challenge is in matching the type of vine with the type of soil. He said that he can distinguish the soil type through the flavour of the wine. 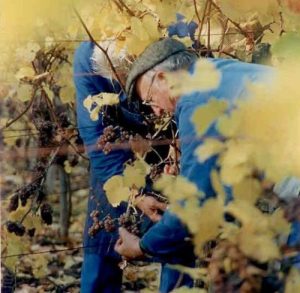 The challenge is further complicated by the long time cycle of viticulture. Their vines take 15 years to start producing, reach their peak at 25-40 years, and need to be replaced by 65. So the production currently depends on vines planted by Christian’s grandfather, and he is making planting decisions for the sixteenth generation, guessing at climate change and many other factors.

I was impressed to learn that over 30% of Alsace wines are now organically produced, and Beyer recently started using biodynamic standards, which are even higher. Christian believes these standards improve the wine, and their prices, and their environmental impact. 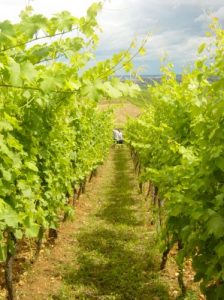 Christian’s views had many parallels with my natural happiness approach, and it intrigued me to think what new insights grow from using vineyards as the model, instead of gardens or farms.
The long timeframes are a big difference, and are closer to human life cycles. I believe that people also produce their best vintage when they match their temperament and hopes (‘the plant’) to their circumstances (‘the soil’). When they do, as Christian Beyer would say, eighty per cent of the work is done.