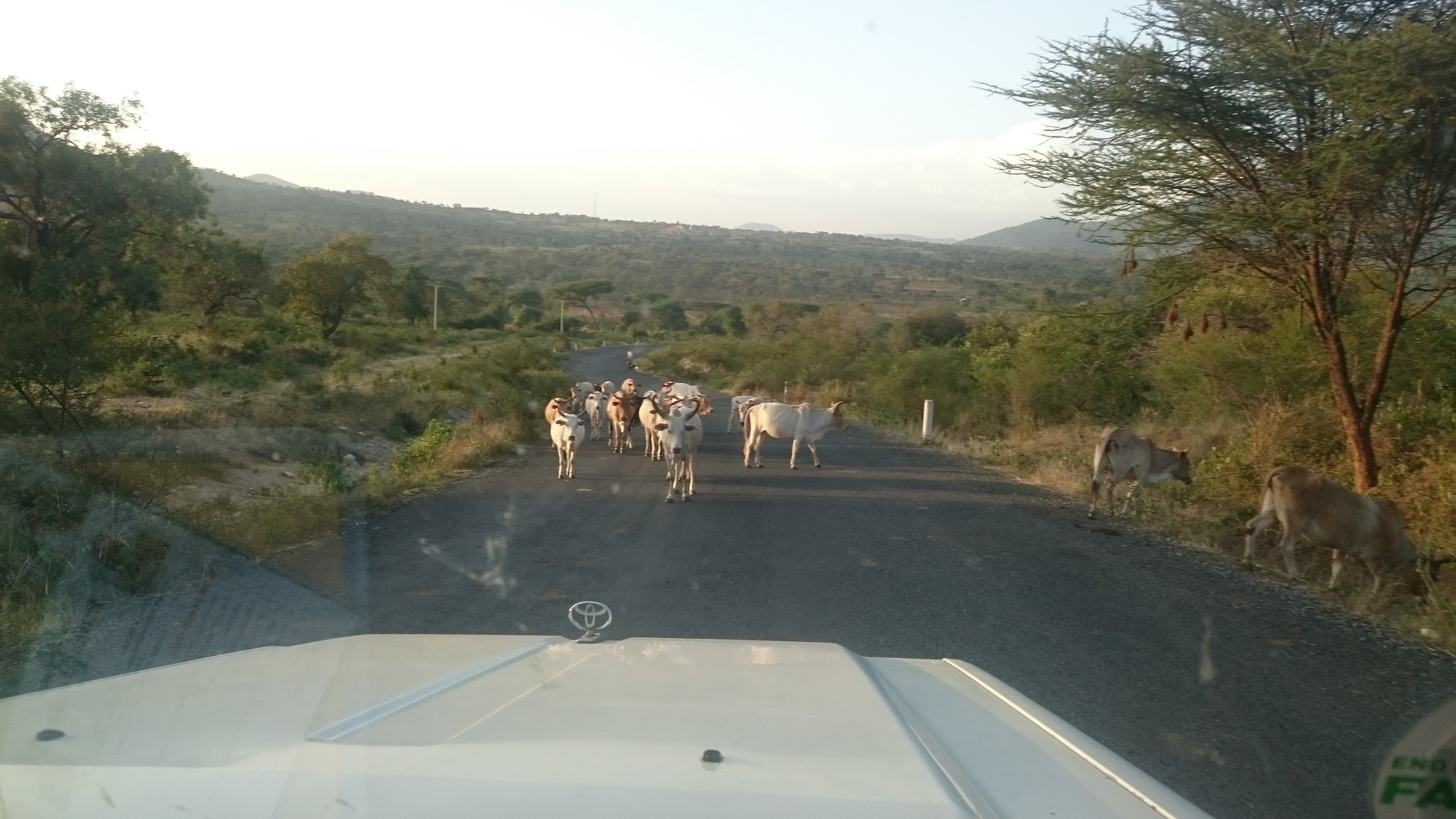 We will not be moved…

It happens so often, you suspect the animals must enjoy it: why else do they spread the full width of the tarmac, instead of using the broad gravel verges?  The cows are the worst: they glower balefully as if they might charge, and only turn aside from our approaching vehicle at the very last minute.  At least the goats lose their nerve sooner.

Roads in Ethiopia are a community resource, with a stupendous range of users managing to share them.  It helps that most roads are not just a two-lane tarmac strip, but a gravel belt each side.  This gives lots of scope: for example donkeys on the far right, overtaken by a pony cart or a tuk-tuk, overtaken by a bus – with any traffic going the other way using the gravel strip on the far side.

I had rented a car and a driver for a long trip to the Bale Mountains, a beautiful, remote area in the far south-east of Ethiopia.  We tried to overtake a slow lorry in mist, and car appeared, speeding towards us.  My driver sensibly swerved off the tarmac onto the far-side gravel, alarming a lone riderless donkey whose lane discipline had been impeccable.  We bounced along the gravel for a few hundred metres, and rejoined the traffic as if nothing had happened. 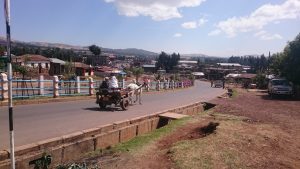 Street scene from a rural town…

The sense of community remains very strong in Ethiopia, and qualities like tolerance and mutual support seem stronger here.  There was never a sense that some users had a right to the road, and others didn’t: everyone flowed around each other.  By contrast, in Britain it seems that car and lorry drivers believe they have an exclusive right to use the tarmac, and slower, more erratic travellers are an intrusion.

Livestock are a big part of rural life in Ethiopia, and the roads are constantly used to move them to grazing or to market.  A lot of animals meander along with no supervision, especially donkeys, who have a strong impulse to turn suddenly across the road.

Because rural prices are much lower, my enterprising driver bought two chickens to take home to Addis Abbaba.  They had a nice box with airholes, on the roof of the car.  However, after driving through heavy rain, the box fell apart, leaving the chickens flying through the air.

The community response was impressive.  Cars going the other way flashed lights and shouted to tell us of the problem.  A huge lorry behind us stopped, and the driver rescued the shocked chickens from the middle of the road.  I imagine one chicken telling the other, “I always had a bad feeling about today”.

I haven’t yet mentioned the pedestrians, horse-riders, motorbikes, handcarts, nor the fearsome potholes, ruts, gulleys… but what’s impressive is how these myriad users flow peaceably around each other.  British drivers could do with more of that tolerance.

Recently I’ve been reading The Granta Book of the African Short Story.  When I travel, I like to read something connected with my destination, so this book went with me on a recent trip to Kenya to see the work of Farm Africa: a UK Charity who enable peasant farms in East Africa to adapt to climate change and other challenges.

Frankly, many of the short stories in the Granta collection are pretty depressing.  A lot are about Africans living abroad, unhappy at the many problems of their original home and their new one.  Two stories actually set in Kenya are equally sad: one about child prostitution in Kivera, the biggest slum in Nairobi, the other about tourists, guides, and all the pretence that can happen between them.

It’s good to know about the problems, and there are plenty of them.  But this book helped me to look hard at the reality I saw around me: not only in Nairobi, but also three days of travelling deep into rural parts of western Kenya.  What I saw is a society which is basically working, in many ways, for millions of people.

There are many things which could be better, in Kenya, as across Africa.  But in the West, we don’t hear enough about what’s already good: all the people who are basically happy, fed, housed, and at peace.

Nor do we hear enough about the extensive development support which the UK, European Union, US and others provide in Kenya and elsewhere.  Increasingly, this support is geared to helping the local economy work better, not to the relief aid that many in the west still think is happening.

Farm Africa were pioneers in this new approach, which is why I have been one of their donors since 2005.

Kenya has under-used fertile land, and low farm productivity, so there’s huge scope to improve the incomes of subsistence farmers, and help Kenya to feed itself.  The Farm Africa projects I saw are clearly achieving this, and it would be great if they can be expanded to a larger scale.

So if you want to get a flavour for Africa, you may want to read the Granta collection, but do balance it with a trip around the Farm Africa website.