In September 2017, I was part of the delivery team for a major gathering on this theme, hosted by the Network of Wellbeing and Hawkwood College. This quasi-conference aimed to provide an overview of the wellbeing sector in the UK, and it’s a vibrant and encouraging picture.

Among daily bad news, it’s great to hear of substantial progress, for example the Happy City project in Bristol, Birmingham’s Wellbeing Services, a global view from Oxfam, and Chris Johnstone on Five Shifts for the Wellbeing Revolution

The gathering aimed to explore wellbeing at the personal, community, and world levels, and there were excellent, encouraging session leaders and well-informed participants across the spectrum.
At the personal level, Chris Johnstone offered some valuable fresh perspectives. He spoke of focussing on the best potential outcome in any difficult situation, and aiming to make it more likely. He also described a new frontier in positive psychology: the science of prospection, a different way of looking into the future. 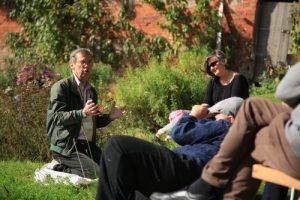 My session on Natural Happiness was well attended and got outstanding feedback. I was helped by being the only workshop outdoors, and by the beautiful orchard and gardens as a setting. You can see more about my Seven Seeds model here.

At the community level, many exciting projects were presented: some small and informal, but several at city scale, and some led by a local authority, such as Birmingham Wellbeing Services. Social prescribing is a valuable new trend, where GP’s prescribe activities which create social contact.

Katherine Trebeck of Oxfam presented a fascinating global view. Oxfam track how many of the world’s richest people have the same wealth as the poorer half of the world population: the ratio is now 8 to 3.6 billion. However, she believes change among the uber-rich is possible, and we all need to keep picturing it.

See more about the event here…

Celtic New Year and the dark months ahead are a good time for rest, reflection, opening to new perspectives. You can help this by changing your point of view, and I’d like to share some examples.

A fairly easy change is place. This is one reason I go to the Yorkshire Dales most years. The wild, untamed fells, the miles and miles of spaciousness, and the intricate small valleys below, give me a feeling of expansiveness and new possibilities.

November is the month when I led several of my retreat groups in the Tunisian Sahara – and I’ll be offering one in Southern Morocco, November 10-20 in 2018. In the vastness of the desert, your ideas of who you are fall away, so you can choose again. And the Bedouin nomads are a great model for our times, showing us how to be happy with almost no control or resources. 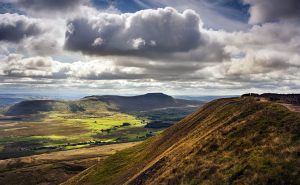 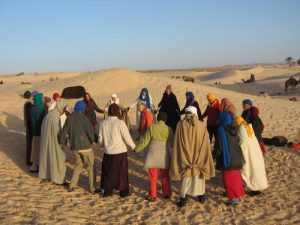 A powerful change of perspective is to imagine yourself as another person or even a thing. Anytime I want to feel more gratitude, I imagine myself as a Syrian refugee. At Hazel Hill Wood, we invite people to sit with a tree, and imagine life from the viewpoint of the tree. Seeing life from the viewpoint of an animal or bird can be a powerful way of changing your view. In the book The Once and Future King, part of Merlin’s training for the Young Arthur is to turn him into an owl and an ant.

Another way to change your view is through time. Imagining the future can be a valuable way to guide your choices here and now. For more on my project exploring this, see www.futurescanning.org.