Therapy: the book by David Lodge 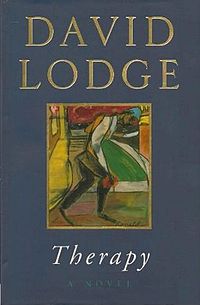 The ‘hero’ of this book is Tubby Passmore, 58: balding, bulging, and thoroughly lost.  Although he’s outwardly successful – well-off, modestly well-known as scriptwriter for a top sitcom, with a steady if dull marriage, Tubby is depressed and confused.

Through the book, we piece together his life story, and share his angst and his varied attempts to resolve it, which include various therapies.  This guy would benefit hugely from Out of the Woods, if he could only find the will to read it.

This story illustrates many of the features of a classic midlife crisis.  In his lostness, Tubby becomes deeply self-obsessed, and this proves the last straw for his wife of thirty years, who demands a separation and insists it’s too late for mediation.

I believe the root of the midlife crisis is spiritual, and Tubby’s case supports this.  Despite being resolutely ‘anti-religious’ since childhood, his first girlfriend is a devout Catholic, and he joins the RC youth club to be with her.  Near the end of the book, he ends up in Santiago de Compostela, and is clearly touched by it.  And his obsession with Kierkegaard brings out the paradox of desiring the spiritual but rejecting the religious.

The first one-third of the book is slow-moving and a bit two-dimensional, but it gathers pace and substance as it goes on.  The section with first-person accounts from the other key characters in the story is superb, and this could be a good tool for anyone wanting to understand their crisis (and its effect on others) more deeply.

Likewise, Tubby’s return to memories of his adolescence is a rich episode which rang true for me.  Part of the healing that can emerge from a midlife crisis is revisiting, reliving, re-framing one’s formative years.

Another feature of the male midlife crisis which Tubby exemplifies is the bizarre things that happen when the immature, often sex-driven impulses of an adolescent are paired with the resources and contacts of a midlife man.  Few teenagers can afford a London pad, a flashy car, or flights to LA to pursue a sexual fantasy, but some midlife men like Tubby can, and the results are often embarrassing.

So, it’s an entertaining, touching, and instructive read.  But if you’re choosing one book about midlife crisis, Out of the Woods is the more practically useful!