This blog is artfully designed to suit both general hikers or cyclists, and railway lovers. Just choose your section!

For hikers and cyclists
On summer weekends, you can do a great trip right around the edge of Dartmoor: the cycling/walking distance is around 24 miles, and the rest can be done by train. The key to this is a special train service between Exeter and Okehampton, which only runs on summer weekends. 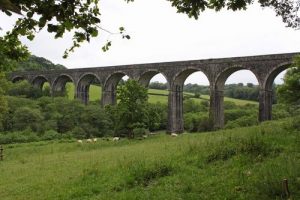 From Okehampton, it’s worth taking a small heritage line, the Dartmoor Railway, another 3 miles west to the spectacular Meldon Viaduct. You are now on the Granite Way, a glorious off-road cycle trail on the former railway track, running downhill to Lydford. The route continues on minor roads through Tavistock, and beyond that, you can follow the Drake’s Trail, largely on another former railway line, down to Plymouth. For a shorter ride, head to Gunnislake, a few miles west of Tavistock, where you can pick up a train to Plymouth, and another train back to Exeter. I’d advise doing this route anticlockwise, as the trains will get you to the highest point of the route, around 950ft. It’s a great day out, and there are plenty of places for lunch and refreshments.

Railway lovers
The great railway races to Scotland are well known, but for a while there was fierce rivalry in the West Country between the GWR and the London and South Western Railway. The biggest revenue source was Plymouth: the GWR got there by going south of Dartmoor, with the famous but vulnerable coastal route, and steep gradients around Rattery. 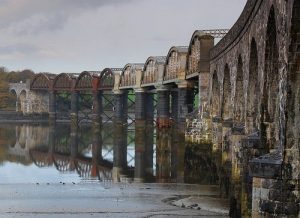 The LSWR had little choice but to go around Dartmoor to the north: their line ran through beautiful upland landscapes around Lydford, and later skirted the spectacular Tamar Estuary, with a couple of long viaducts.
The combination of intense rivalry between the railway companies, and tortuous topography, produced a railway network in Devon and Cornwall which was arcane and never commercially viable. The LSWR routes west of Exeter were nicknamed the Withered Arm because of their bizarre shape.

I recently followed the LSWR main line route from Exeter to Plymouth. The long stretch from Exeter to Okehampton currently has a passenger service only on summer Sundays, but it is hoped to extend this. Okehampton station has been beautifully restored by the Dartmoor Railway, and the station buffet is excellent. The trains they run are rather less so: mine consisted of a diesel shunter, one coach, and a guard’s van. However, the railway devotees like me got a great view standing in the open front of the guard’s van as we trundled up the line. 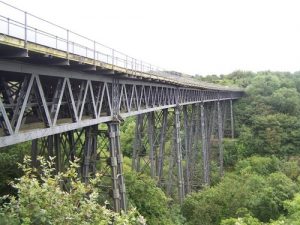 The Dartmoor Railway takes you up to Meldon, and Meldon Viaduct is truly spectacular. It is one of the very few remaining large metal viaducts in this country, as the others were swept away by Beeching. From here, the Granite Way enables you to follow the old track bed down to Lydford, and you can easily imagine Bulleid Pacifics charging up the gradients around gentle curves, pulling the Atlantic Coast Express.

West of Lydford, the track route is hard to follow exactly, but you can shadow it on footpaths and country lanes to Tavistock. From there, I recommend cycling to Gunnislake, which is now the end of the line from Plymouth. This line crosses the spectacular Calstock Viaduct, and rejoins the old LSWR main line at Bere Alston, so you get the views of the estuary and the viaducts as you travel down to the Plymouth. A couple of the stations on this section are well preserved, especially Bere Alston, which also has some old rolling stock.

From Plymouth, you can catch a mainline train back to Exeter, but if you have a bike, you should it reserve it in advance.