Snow White woke tired as usual, dreading the day ahead. She thought, “if only evil queens just brought poisoned apples!”

The modern Evil Queen had used the legalities of the German health care system. She realised that all seven dwarves had Special Needs of some kind (Grumpy, Sneezy, Dozy etc.), and promptly had Snow White designated their legal guardian, their Beantworter. 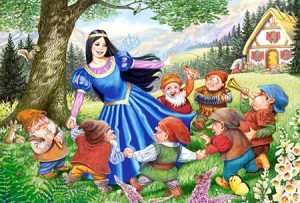 The Evil Queen also used Boiled Frog theory: if a frog is dropped into boiling water, it jumps out, but if you gradually turn the heat up, it boils to death. Each year she added one more Difficult Dwarf to Snow White’s burden: the poor girl had aged eighteen years in ten, and had lost hope and what German’s call wiederstandfahigkeit, or resilienz for short.

If there is a Cosmic Scriptwriter, she or he clearly has a fine sense of irony, shown in this story by the Fairy Godmother appearing in the guise of a compliance officer. She taught Snow White a basic tenet of front-line resilienz: empower your clients, and start setting your own boundaries.

Snow White realised how dependent the dwarves had become, and started doing less for them. Soon there was uproar, but out of it the dwarves started to find their talents. Grumpy got so cross that he took initiatives. Smarty started to clean the place up. Sneezy was told by the others to live in the outhouse. Chirpy started appreciating everyone’s progress. Dozy gave up his tranquilisers and set up a cooking rota.

You may be wondering where is the Prince in this story? The Evil Queen had side-lined him early on, by having him committed to an asylum for narcissistic heroic fantasies.

The Fairy Godmother, whose knowledge of German regulations was prodigious, explained to Snow White that after ten years’ service as a guardian, she could apply to be released from her post and would qualify for a training grant: she decided to train to be a Heroine. And she could nominate a new guardian: who else but the Evil Queen?

Of course, modern training for a Hero/ine includes nothing so crude as physical combat. There are modules like Einflussnetzentwicklung (building an influence network), Buerokratieuberreden (persuading bureaucracy), team dynamics and eco-psychology. For her practical module, Snow White challenged the asylum’s assessment procedures, and secured the Prince’s release. They lived resiliently into the future.

Note all references to German regulations and institutions are speculative.